Romania’s justice minister has resigned following the largest street protests in the country since the fall of communism in 1989.

Florin Iordache was one of the architects of an emergency ordinance passed by the government on 31 January that would have decriminalised some official misconduct offences.

The government said the order and another draft bill on jail pardons were needed to ease prison overcrowding and bring the criminal code into line with recent constitutional court rulings. However, many Romanians believed the proposal would set back the country’s anti-corruption efforts and hundreds of thousands of people took to the streets in protest.

“I have decided to offer my resignation,” Iordache told reporters on Thursday, adding that all of his initiatives were legal and constitutional. 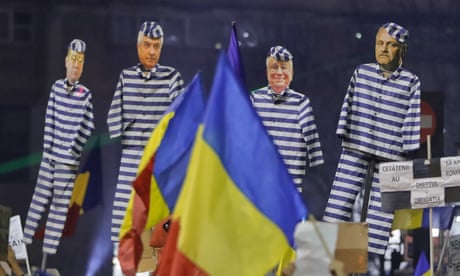 ’27 years of corruption is enough’: Romanians on why they are protesting

The resignation was not unexpected. On Wednesday, the prime minister, Sorin Grindeanu, announced he had already made up his mind regarding the fate of Iordache, but would delay making the decision public until after a meeting of the government on Thursday.

Florin Jianu, the business minister, resigned over the ordinance on 2 February, writing on Facebook: “I don’t want to have to tell my child that I was a coward and I agreed to something that I don’t believe in … This is what my conscience tells me to do.”

Last weekend, the government backed down and repealed the ordinance, although half a million people nevertheless demonstrated across the country on Sunday evening.

Protests have continued this week, albeit in smaller numbers. There have also been calls for the resignation of Liviu Dragnea, the leader of the governing Social Democratic party, who faces charges of defrauding the state of €24,000 (£20,400).

On Wednesday, the government survived a vote of confidence brought by the opposition. A day earlier the country’s president, Klaus Iohannis, addressing parliament, blamed the government for causing the crisis.

Radu Magdin, an analyst for a political consulting company, said Iordache’s resignation would help the government’s cause.

“Iordache is now hated by a lot of people so, for the moment, this will definitely help decrease the numbers protesting and calm the mood,” he said. “His departure is to show that the Social Democrats have learned their lesson and it will have an effect''.